At its meeting on September 12, 2011, the San Francisco Ethics Commission took the following action:

The Commission’s next scheduled meeting will be held on Wednesday, October 19, 2011, at 5:30 p.m. in Room 416 City Hall.  This will be a regular meeting of the Commission but held on a different day and room because of the holiday that occurs on the second Monday of October. 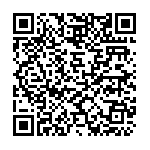 Scan the QR code with a mobile device camera to access the latest version of this document online:
https://sfethics.org/ethics/2011/09/press-release-september-13-2011-summary-of-actions-taken-at-september-12-2011-meeting.html