EXECUTIVE DIRECTOR’S REPORT
TO THE SAN FRANCISCO ETHICS COMMISSION
For the Meeting of February 23, 2015.

The budget proposal as adopted by the Commission is being submitted on February 23, 2015.  The Mayor’s proposed budget is scheduled to be released on June 1 and Board of Supervisor hearings on the budget will also be in June.

As of February 13, 2015, there were 17 pending formal complaints alleging violations within the Ethics Commission’s jurisdiction.

a. Filing deadline.   The most recent filing deadline fell on February 2, 2015 for the Second Semi-annual statement, which covers the reporting period ending December 31, 2014.  Staff has identified twenty-one committees who have not yet filed their required campaign statement. These filers have been contacted by phone of their filing obligations. Staff will send these filers a Non-Specific Written Notice. In the interim, staff receives and processes campaign statements for this and other filing deadlines.  Staff continues to answer questions from and conduct outreach to candidates and other committee representatives about campaign finance filing obligations. The next filing deadline falls on July 31, 2015 for the First Semi-Annual statement, which covers the reporting period ending June 30, 2015.

As of February 13, 2015, 123 individual lobbyists were registered with the Commission.  Total revenues collected to date for the 2014-2015 fiscal year amount to $80,000 in lobbyist registration fees.  The filing deadline for the next lobbyist disclosure statement is March 16, 2015.

Instructions regarding the 2015 Form 700 filing requirements were sent to Department Heads and Filing Officers on January 22, 2015.  A training for Filing Officers was held on February 4, and an additional training is scheduled for March 4, 2015.

At the August 18th, 2014 discussion of the 2013-2014 Civil Grand Jury report, the Commission expressed interest in pursuing “Recommendation 4,” that Form 700s be formatted to allow the content of the forms to be searched.  Staff indicated that it would be in the best interest to wait for the FPPC to define a statewide standard for the Form 700 data format before building a publicly accessible dataset and search site.  At the time, the FPPC had informed staff that they might develop a format by the end of 2014.  A state format has not been developed and staff does not anticipate that one will be developed soon.  Thus, staff now recommends moving forward without a state format.  Staff will start discussions with Netfile and will seek public input prior to implementation. 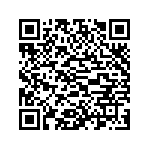 Scan the QR code with a mobile device camera to access the latest version of this document online:
https://sfethics.org/ethics/2015/02/executive-directors-report-february-23-2015.html