November 14, 2022
To: Members of the Ethics Commission
From: Patrick Ford, Director of Enforcement

This report provides general programmatic updates and data about the cases handled by the Commission’s Enforcement Division.

The Commission’s Enforcement Division is responsible for investigating violations of state and local laws relating to campaign finance, lobbying, conflicts of interest, governmental ethics, and whistleblower protection. Enforcement matters are initiated both in response to complaints the Division receives from members of the public and by the Director of Enforcement based on information contained in public records, media reports, and other sources.

All enforcement matters are first examined through the preliminary review process, which assesses whether there is reason to believe that a violation of law within the Commission’s jurisdiction has been committed. Matters will be dismissed in preliminary review if they are outside of the Commission’s jurisdiction, lack sufficient evidence to support further investigation, do not allege violations of the law, pertain to conduct that has already been investigated or resolved, or other similar bases that indicate an investigation would not serve the interest of justice.

Matters that are not dismissed in preliminary review are opened as investigations. The Enforcement Division seeks evidence through the investigation that would indicate whether a violation of the law has been committed. This may include interviewing witnesses, reviewing documents, and issuing subpoenas when necessary. Details about any matter that is opened as an investigation are shared with the City Attorney’s and District Attorney’s offices so that those offices may determine whether they wish to pursue civil or criminal penalties, respectively.

In Fiscal Year 2022 (July 1, 2021 – June 30, 2022), the Enforcement Division concluded a total of 99 enforcement matters. Eleven of these matters (11 percent) resulted in stipulated settlements approved by the Commission In total, these settlements represented penalties of $89,140. The penalties are summarized in Chart 1 below and are categorized by program area. 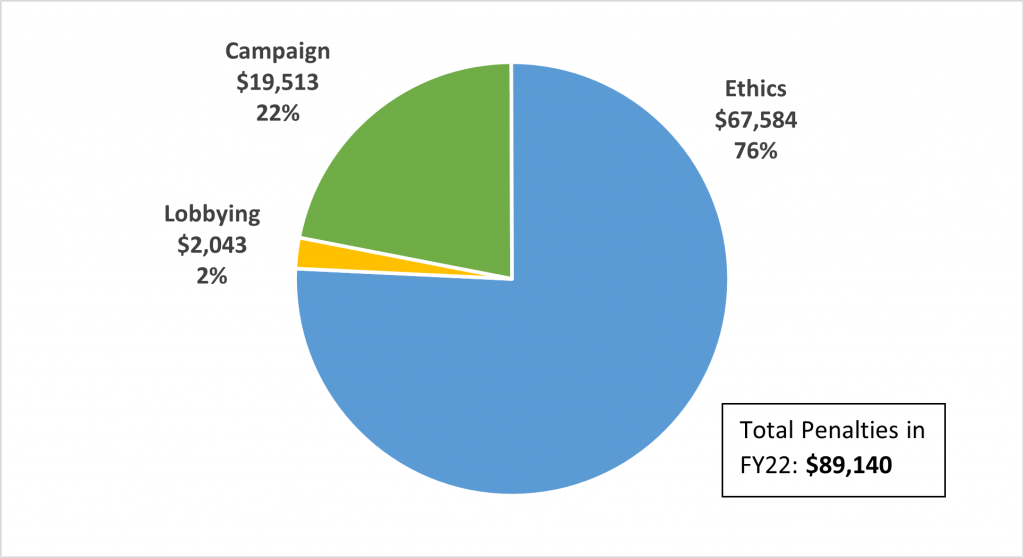 So far in Fiscal Year 2023 (July 1 – November 10, 2022), the Enforcement Division has concluded a total of 81 enforcement matters. Two of these matters (2.5 percent) resulted in stipulated settlements approved by the Commission. In total, these settlements represented penalties of $23,600. The penalties are summarized in Chart 2 below and are categorized by program area. 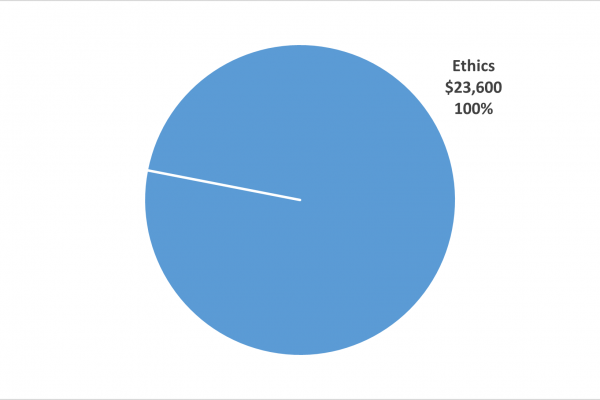 So far in FY23, 46 enforcement matters have been initiated. The majority of these (36) began from complaints that the Commission receives from the public, but this also includes 10 matters that the Division initiated based on media reports, observations in public disclosures, independent research, and interactions with regulated persons. Some of these matters initiated in FY23 remain in progress while others have already been resolved.

The current cases in progress are broken down by program area in Charts 3 and 4 below. 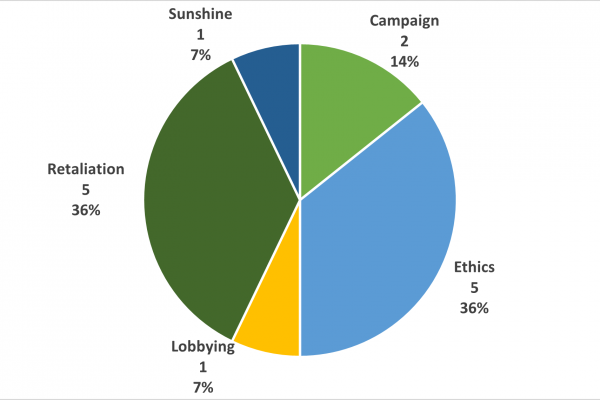 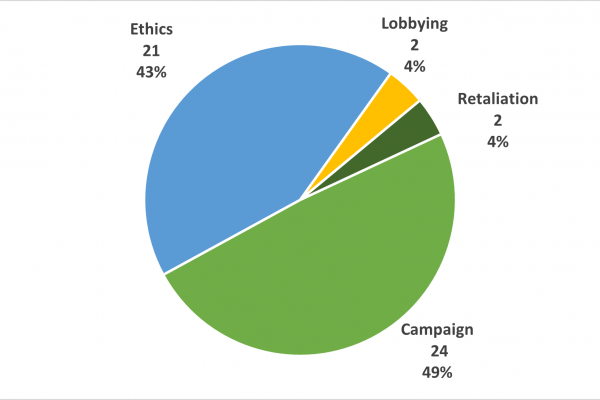 The Division is currently pursuing a number of initiatives that will continue to build the Commission’s enforcement capacity. This work is done in order to better conduct thorough, high-quality investigative work, develop more high-impact cases, and achieve more efficient case resolutions. This section summarizes some of the primary initiatives currently underway.

A major focus of the Division’s work this year has been developing specializations within the team. This is true of both program areas and functions. Investigators have developed expertise in the specific areas of law administered by the Commission through case work and training. Thanks to the expanded number of investigators, cases can now be assigned in many instances to an investigator that has handled similar cases in the past and who has particular expertise in the laws at issue. These subject matter specializations also support increased proactive enforcement work, which is when investigators initiate enforcement matters without receiving a complaint. The Charter provides for this proactive work to take place, and it is an important way to ensure that violations that are apparent from disclosure filings, public records, or media reports are investigated appropriately.

Another major focus this year has been refining and documenting the protocols followed by the Division when investigating cases. Although the Division has always followed protocols, the process of refining and documenting them more thoroughly has allowed the newly expanded team to effectively collaborate and conduct their work in a standardized way. Common investigative documents are created based on templates, and basic protocols for preliminary review, investigation, and other processes are regularly updated as the Division’s work evolves. These confidential investigative documents also serve as helpful resources for onboarding new investigators. The Division is also developing investigative resources that are specific to particular violations that are commonly investigated by the Commission. These resources will identify the elements of violations and the common types of evidence used to substantiate them.

Unfortunately, Ms. Mockett ended her employment with the Commission in October. Between this vacancy and Mr. Wilson’s promotion, there are two vacancies in the Division: one senior investigator (1823) and one investigator (1822). Filing these positions is a top priority, and hiring is targeted to begin in the third quarter of FY23.

The Division has been collaborating with the Commission’s Electronic Disclosure and Data Analysis (EDDA) Division to develop a new case management system that the Division will use to administer enforcement matters. The new system will provide for faster and more thorough communication between investigators who are collaborating on a case and improved document management. Deployment of the system is planned for the end of this quarter. Scan the QR code with a mobile device camera to access the latest version of this document online:
https://sfethics.org/ethics/2022/11/ethics-commission-meeting-november-18-2022-agenda-item-5-quarterly-enforcement-report.html